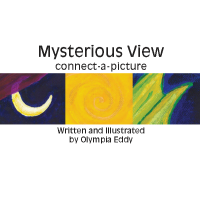 The beautifully illustrated story, published by Dog Ear Publishing, unfolds piece by piece, with three clues paired with a mysterious image on each new page. For instance, a close-up image of curtains brings the following clues – “I can darken the inside world…I stay close to the wall…I am velvety soft” – and asks the question, “What am I?” When the images are combined at the end of this fascinating work, they form a complete picture that accompanies the story, a glimpse into another world.

In Mysterious View, author and illustrator Olympia Eddy uses bold brush strokes and vivid colors to create striking images of the ordinary and the extraordinary. Young children will enjoy the intense colors of the illustrations; while older children will test their critical thinking by combining the text with the image on each page and using inference to come to a logical conclusion. The final whimsical drawing brings all the elements together and inspires the reader’s imagination.

A graduate of Clemson University, Olympia Eddy has a background in graphics and a love for children’s literature. She created the idea for Mysterious View while working with kindergarten and fifth-grade students at T.C. Henderson Elementary School, in Lake Toxaway, North Carolina. She is currently working on the next book in the Mysterious Series, Mysterious Circus, where mythical creatures gather.

The Amazon Breakthrough Novel Award, in its third year, is an international contest open to unpublished and previously self-published novels waiting to be discovered. Daniel, by Keith Yocum, was a semi-finalist in the Adult Fiction category.

It’s January 1972, and the American soldiers at the firebase Martha in Vietnam are deeply entrenched, awaiting their next orders, when a mysterious stranger wanders in from the depths of the jungle. He’s an American GI, and after some prodding he remembers his name is Daniel Carson, but he is unable to remember anything else about his prior whereabouts. However, he seems to have an eerie prescience about the actions of their enemies. After further investigation, it’s discovered that he was reported killed in action not far from the firebase. Is he a spy? A ghost? A guardian angel? A good-luck charm?

Daniel, published by Dog Ear Publishing, is a fascinating glimpse into the psychology of soldiers under attack. The action is relentless, and the twists and turns of the plot keep the reader spellbound. The colorful characters are well-rounded, and the settings are well-rendered, from the steamy jungle of Vietnam to late-1970’s America. The soldiers’ plight during wartime and after is told with feeling and empathy. Yocum manages to present a realistic picture of war and a great story at the same time.

Keith Yocum has years of journalistic experience, as a reporter as well as an editor and advertising director in the Boston area. His journalistic background is evident in the clean prose and fast-paced storytelling found in Daniel. This is a novel that will raise questions as well as goosebumps, and it will leave the reader wanting more.

A desperate teenage mother gives her infant daughter up to an older Christian couple. Thus begins the inspiring true story of author Susan Gore’s life. Under the strict guidance of Nanny and Papa Martin, whose own children have long since left the nest, little Susan tries her best to be a good Christian girl. Unfortunately, Nanny takes the mantra of “spare the rod and spoil the child” quite literally and Susan often has her legs whipped and spends a lot of time in a scary, dark closet being punished. Conscious as a young child–after a very abrupt and hurtful revelation from Nanny herself–that Nanny and Papa Martin are not her real parents, Susan can’t help but feel like a misfit. She feels terrified at the prospect of not being good enough for Jesus when the rapture comes. With thoughts like these, how can a girl be truly happy?

Susan spends her life searching for answers, and in the meantime gets married and has a child. Finally she finds fulfillment in the field of Natural Healing, where she experiences her own healing. Later in life, she discovers the Universe doesn’t look at the names of religions or rules at all, it’s what inside the mind, heart and spirit that matters.

A Blessing of Sunshine and Wrath, publised by Dog Ear Publishing, is a memoir told from the perspective of the adult Susan, who has undergone years of therapy and soul searching and has come to forgive, even love her adoptive mother. She writes with love and occasional humor. Readers will be moved and inspired by her life story.

Aeonna Ja’Aquiria is the Queen of the Catanians, an endangered race of people who are part cat and part fearsome warrior.  The Catanians are a powerful people, and Aeonna is among the most powerful.  When it is discovered that Aeon is part of an ancient prophecy she doesn’t believe in, she is forced to partake in the first of many dangerous tasks with the hopes that fulfilling the prophecy could change the fate of her people.   As she dwells among the inferior humans in hopes of discovering the ally of her enemy, Mortimer, a dangerous wizard, she is surprised to find herself forming unlikely alliances with the likes of the young and charming Prince Stephon of Adora, and the beautiful and compassionate Princess Alexandria of Lavacon.

Forces of good and evil collide in ensuring Aeon’s success or defeat. She faces both spiritual and physical obstacles, but the Panthera Prophecy demands she overcome them. Powerful wizards, gods, and manipulative spirits abound in this compelling debut.  There is no shortage of action and adventure, and there’s even time for blossoming romance.  The world of the Catanians is complex and fascinating, and the richly described settings and colorful characters make for a well-rounded and memorable story.

Panthera Leo & The Call of Destiny, published by Dog Ear Publishing, is the first in the Panthera Prophecy series.  Sarah Tyler is a student at ThunderRidge High School, and has dreamed of becoming an author for most of her life.  Her imaginative rendering of the Catanians leaves the reader wanting to hear more from this fresh new voice.

Twelve-Year Old Girl Helps Her Father with His Veterinary Practice and Befriends the President’s Daughter in this Exciting New Release for Young Readers- book by Johnny McConnaughhay, DVM

This story for young readers takes place in the nostalgic town of Midland, Nebraska where charming twelve-year-old Maddison Conners and her veterinarian father, Dr. Mac, go from one animal adventure or emergency to another. During summer vacations, Maddison, or Maddi Moo as she’s called, helps her father at the clinic and on house calls. As the story opens, the President of the United States is coming to town and Dr. Mac has been hired to be the on-call veterinarian for the President! When the first family arrives, Maddi Moo invites the president’s daughter Wendy, who is also twelve, to come and ride horses. Together, Maddi and Wendy share more than one animal adventure as these two girls from completely different worlds become friends.  When near tragedy occurs, the two girls must help free two award-winning horses desperately trapped in their overturned trailer, and later they help save a python from almost certain peril.

Maddi Moo, Veterinarian’s Daughter, Presidential Adventure, published by Dog Ear Publishing, is a story about adventure, family and friendship. Young readers will delight in hearing about how Dr. Mac and Maddi Moo take care of their animal patients. Author Johnny McConnaughhay has been a veterinarian for 18 years in Nebraska and treats both domestic and exotic animals. His two daughters have spent endless hours assisting him and experiencing first-hand the excitement of routine and emergency veterinary medicine. These father-and-daughter adventures are the primary inspiration for Maddi Moo.

New Release Reveals the Power of the Pursuit of Happiness, Fulfillment and Joy- book David Kuenzli

Is it possible to find deeper happiness, even in the midst of life’s most painful and difficult challenges? This is the question author David Kuenzli began to explore after the death of his wife, Donna, from cancer. His work aims to help readers discover steps they can take to create an enduring sense of happiness, even when faced with suffering and adversity. Using a unique and original paradigm for understanding and creating deeper happiness, the author describes the five pools (levels) of happiness and the turbulent waters to avoid on their journey to deeper happiness. The pools include pleasure, success, meaning, purpose and joy.

Diving Deeper, published by Dog Ear Publishing, helps readers discover ways to savor life more deliciously, achieve a balanced sense of success, create a more meaningful life through developing “life passions” (something as simple as stamp-collecting or as complex as working to solve the problem of homelessness in one’s community) and finding one’s “heart passion” (life purpose) through which one seeks to make a difference in the world.

The author, a marriage and family therapist for more than 30 years, became interested in moving away from a traditional psychology that focused primarily on what makes people “a little less unhappy and dysfunctional” to an uplifting focus on what makes people more deeply content and joyful. Kuenzli offers a variety of insights learned from a new branch of psychology called  “positive psychology,” whose purpose is “the study of the strengths and virtues that enable individuals and communities to thrive.”

The book also includes more than three-dozen heart-warming essays written by Kuenzli’s friends, who reflect on what life passions bring them joy. Through their inspiring essays, the author  learned first hand “the truth that deep contentment and joy can slowly arise out of profound loss, like a phoenix rising from the ashes.”

This “work of love” is a complex, comprehensive delve into each chapter of the New Testament.    Over the course of two years, the author has dedicated himself to a survey of the Bible, focusing on the topic of sin—specifically, “who will be saved, who won’t be saved, and how to be saved.”  He challenges readers to tackle this study in hopes of helping Christians understand God’s expectations of them.

The book, published by Dog Ear Publishing, starts with a comprehensive review of sin in both the Old Testament and the New Testament, and progresses to a chapter by chapter painstaking meditation on the nature of sin and the consequences of sin, as well as what a Christian must do to avoid sin.  The language is approachable and the lesson is meaningful.

James Hoffman was saved at age 35, and has dedicated himself to the teachings of God since then.  He has since then spent hours every day studying the word of God, and has studied at the Faith Tech International Correspondence Bible School.  It is his hope that Sin and Life in the Kingdom of God will help to “plant you firmly on the Rock of Jesus Christ.”