Experience A Medical Mission Into the Depths of South Sudan Through “Ajak’s Song”, A New Book by Kenneth Waxman 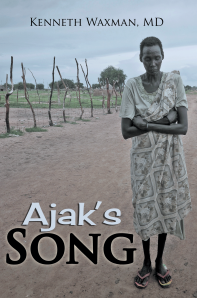 In Kenneth Waxman’s new book, “Ajak’s Song”, released by Dog Ear Publishing, a prominent American surgeon describes his journey to a small tribal village in South Sudan with Doctors without Borders on the eve the country’s vote for independence. He uncovers many truths; about his own life journey, about the courageous people of South Sudan, and about the devastating crisis in health care that the world’s newest nation is suffering.

Today, Dr. Kenneth Waxman announces the publication of his first book, “Ajak’s Song”, the narrative of a surgeon from Santa Barbara who travels deep into the bush of sub-Saharan Africa to discover many truths about himself and about the courageous people of our world’s newest nation, South Sudan.

“Ajak’s Song” begins with the story of Ajak, a 13-year-old girl bitten by a snake, leading to disastrous consequences. Traditional healing methods don’t work, and Ajak faces amputation, which would destroy her dreams of getting married and bringing fortune to her family through her bride price. Carried in her father’s arms for two days, she finds hope at a new international health facility being established in a small Dinka village near the border of North Sudan. There, she meets Waxman, who would be her surgeon, performing multiple operations in attempt to save her leg.  Each time she awakes from her surgeries, Ajak opens her eyes and begins singing a song of hope.

Waxman shares his awe of the beauty of his surroundings, the magic of the tribal culture, and the very different and fascinating perspectives the villagers have about disease and death. He shares stories about his fellow volunteers, South Sudanese children facing death from tropical diseases, patients with violent spear and gunshot wounds, and a young Dinka man who serves as his assistant, in hopes of someday becoming a surgeon himself.  These stories provide a very personal glimpse into the heart of South Sudan, and some of the challenges the young country faces.

Photographs in “Ajak’s Song” illustrate in stark reality the medical challenges South Sudanese villagers face. Although South Sudan has now become an independent nation after decades of revolution, it is left with a terrible lack of health care, without providers or resources to fight the world’s highest rate of tropical diseases, shockingly high rates of maternal and infant deaths, and tragically untreated injuries.

As Waxman works at the clinic and gets to know its patients and helpers, the surgeon finds himself forever changed and hopeful about the country’s potential. He becomes determined to make a difference. As he writes, “I came to understand that despite the pain of the past and the trials of the present, there is an exciting future for South Sudan.”

Readers can also help change lives in South Sudan. Proceeds from the sale of the book will be donated to Future Doctors for South Sudan (www.futuredoctors.org), a nonprofit organization that works to educate young South Sudanese doctors.

Author Kenneth Waxman, a board-certified surgeon, earned his undergraduate degree from the University of California, Berkeley, and his medical degree from the University of Chicago. He did surgical training at Harbor-UCLA Medical Center and then joined the UCLA faculty. He helped develop the first organized trauma system in the United States after joining the University of California, Irvine, where as Professor of Surgery, he directed the trauma center, surgical intensive care and burn units. He moved on to Santa Barbara Cottage Hospital, where he developed the first trauma center on California’s central coast and directed the hospital’s surgical training program. Waxman joined Doctors without Borders in 2010.